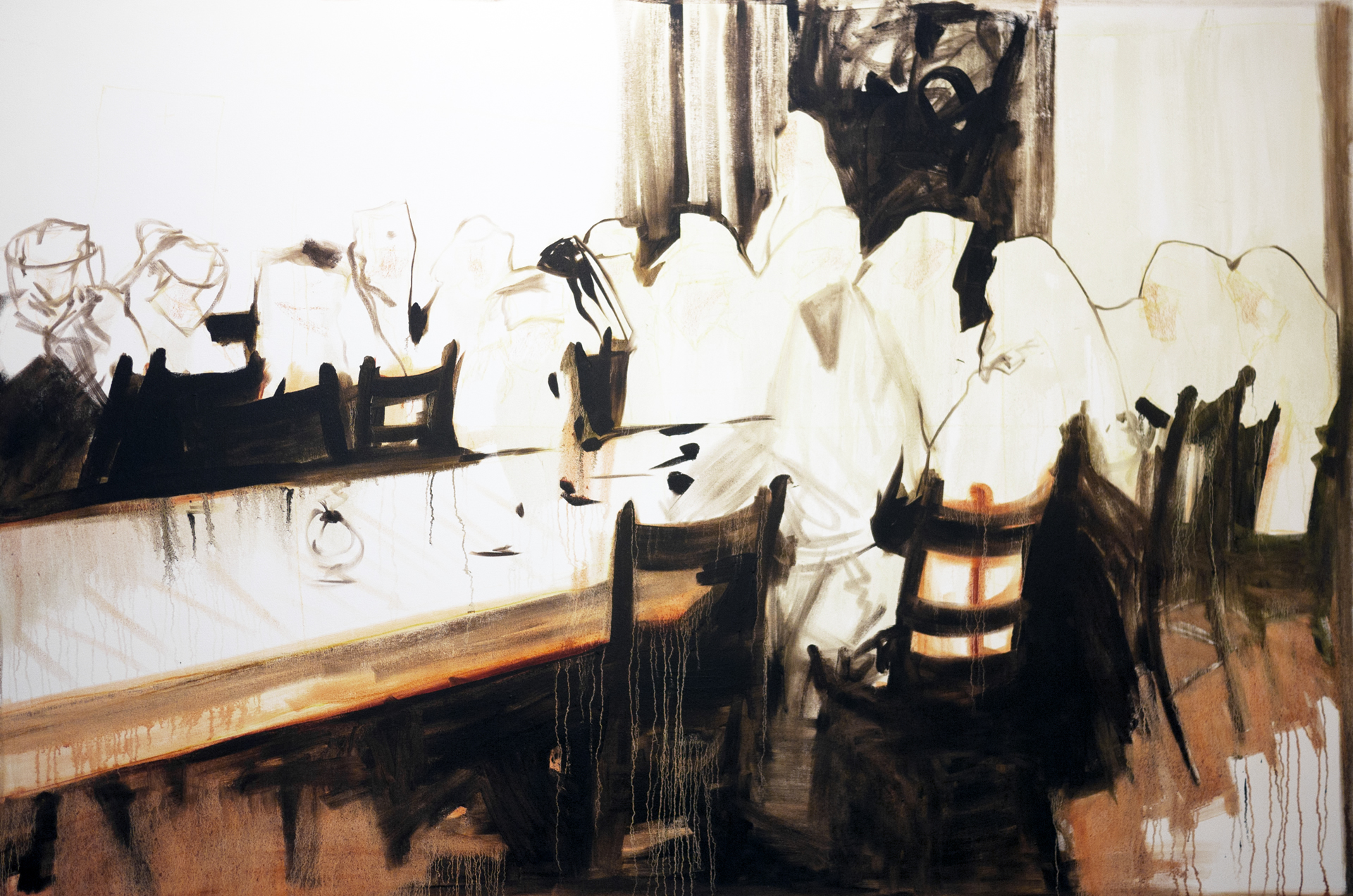 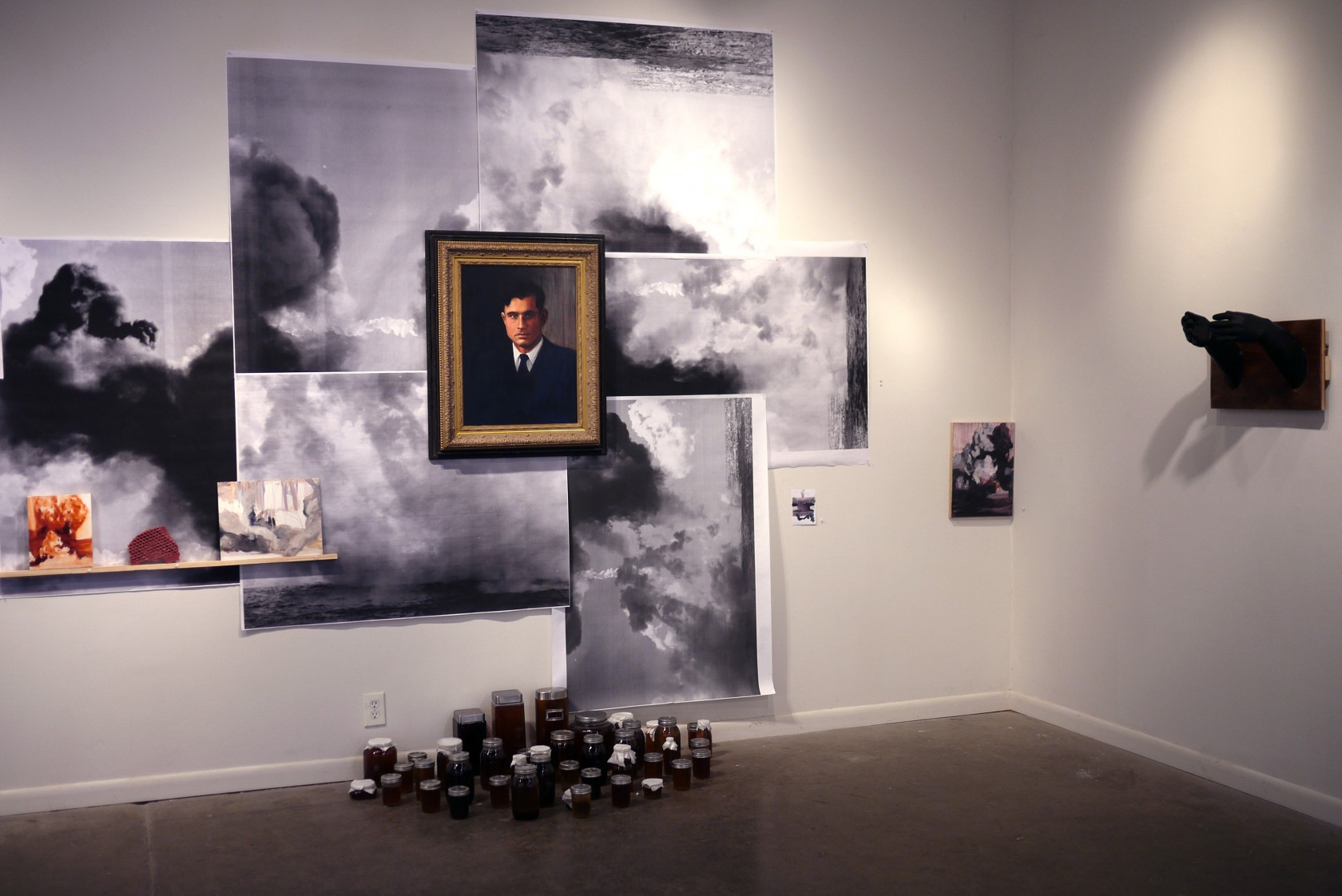 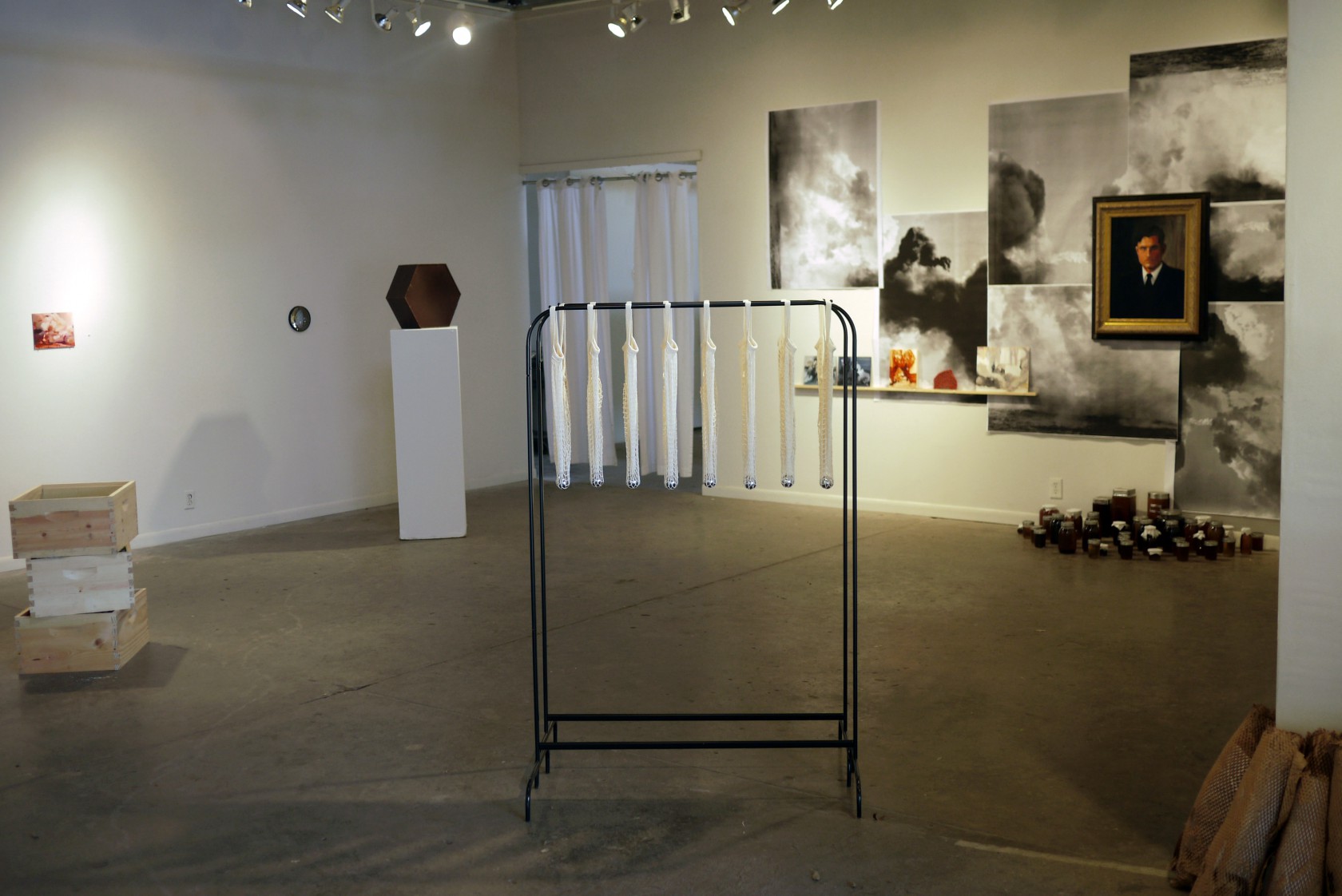 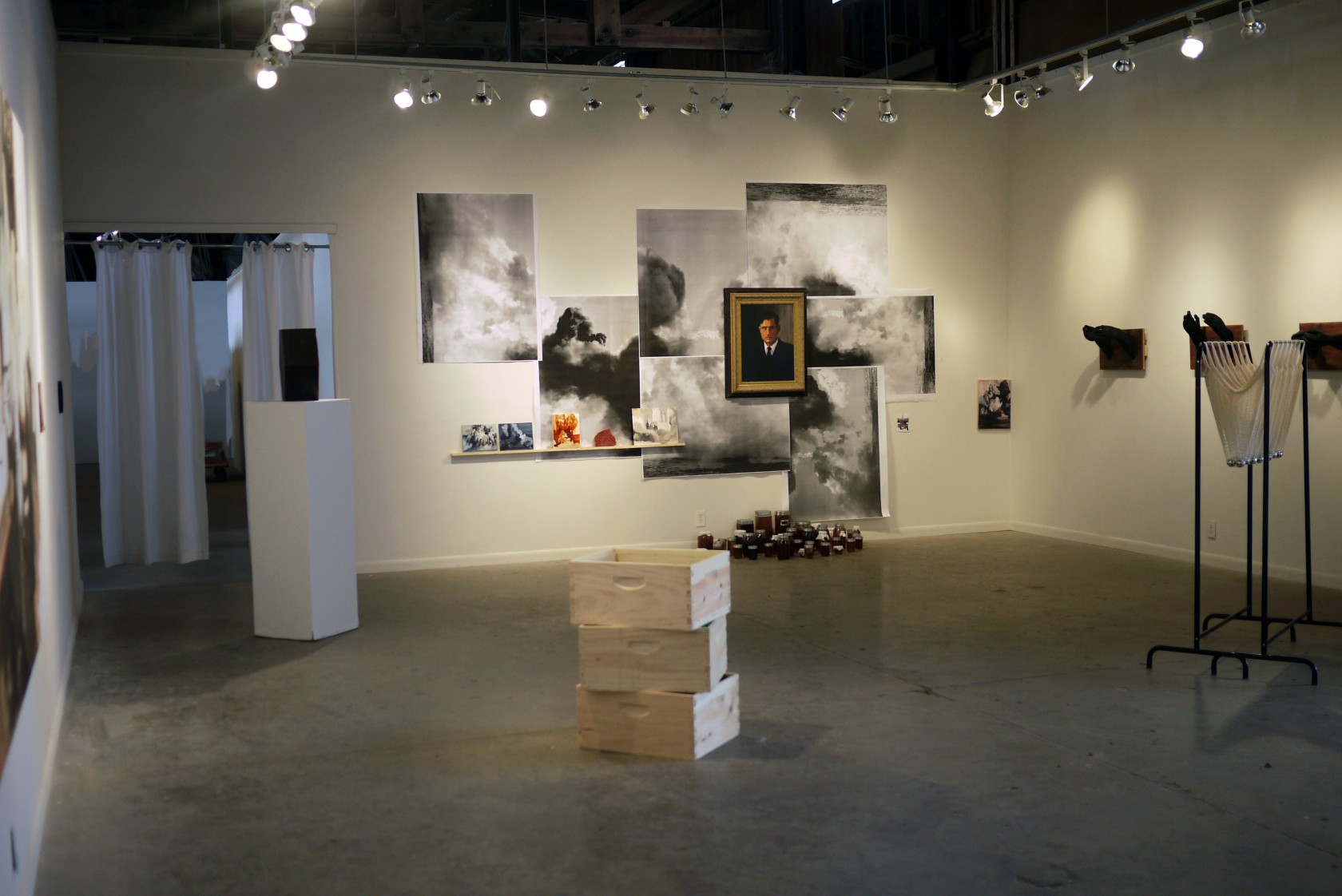 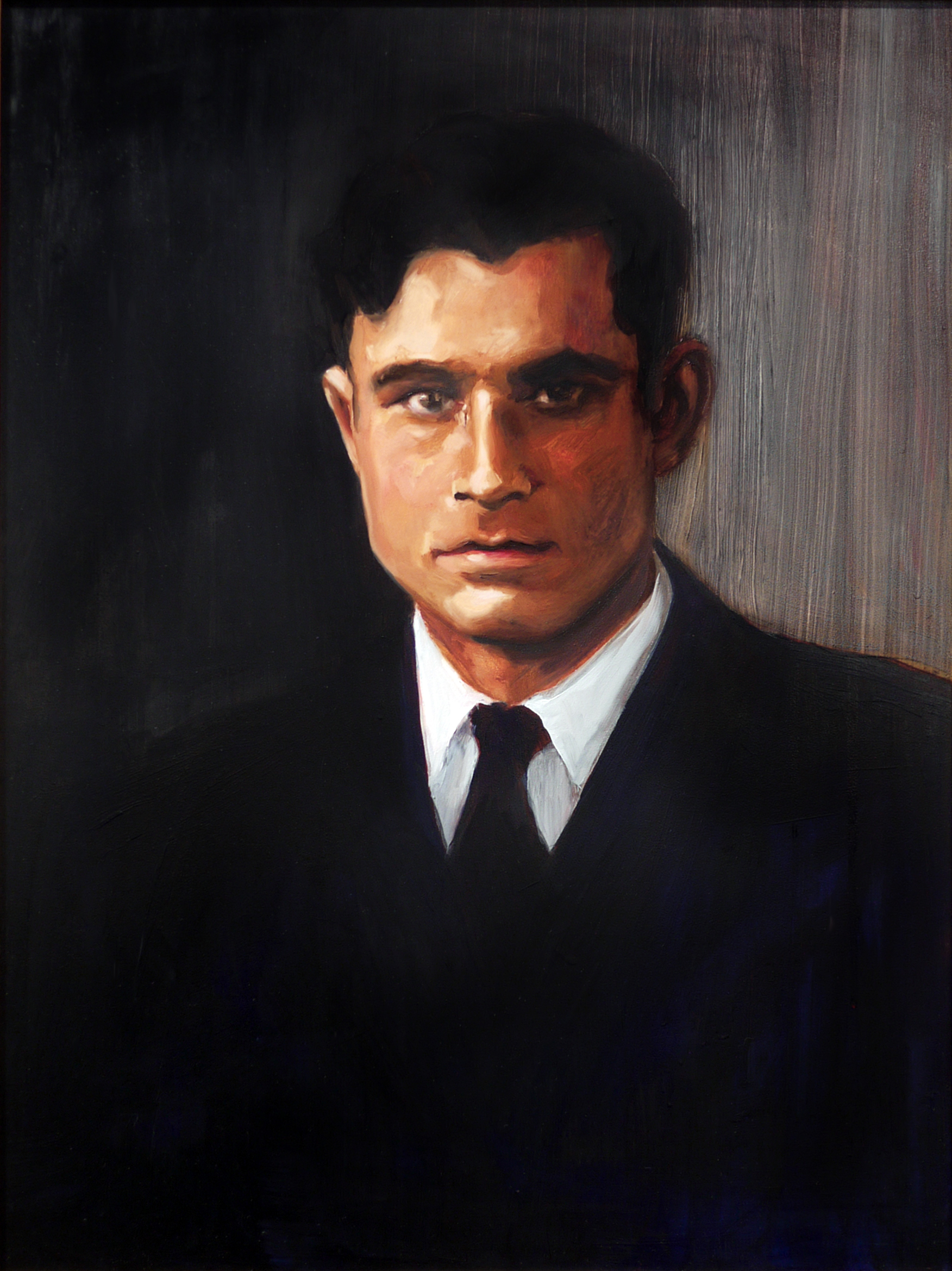 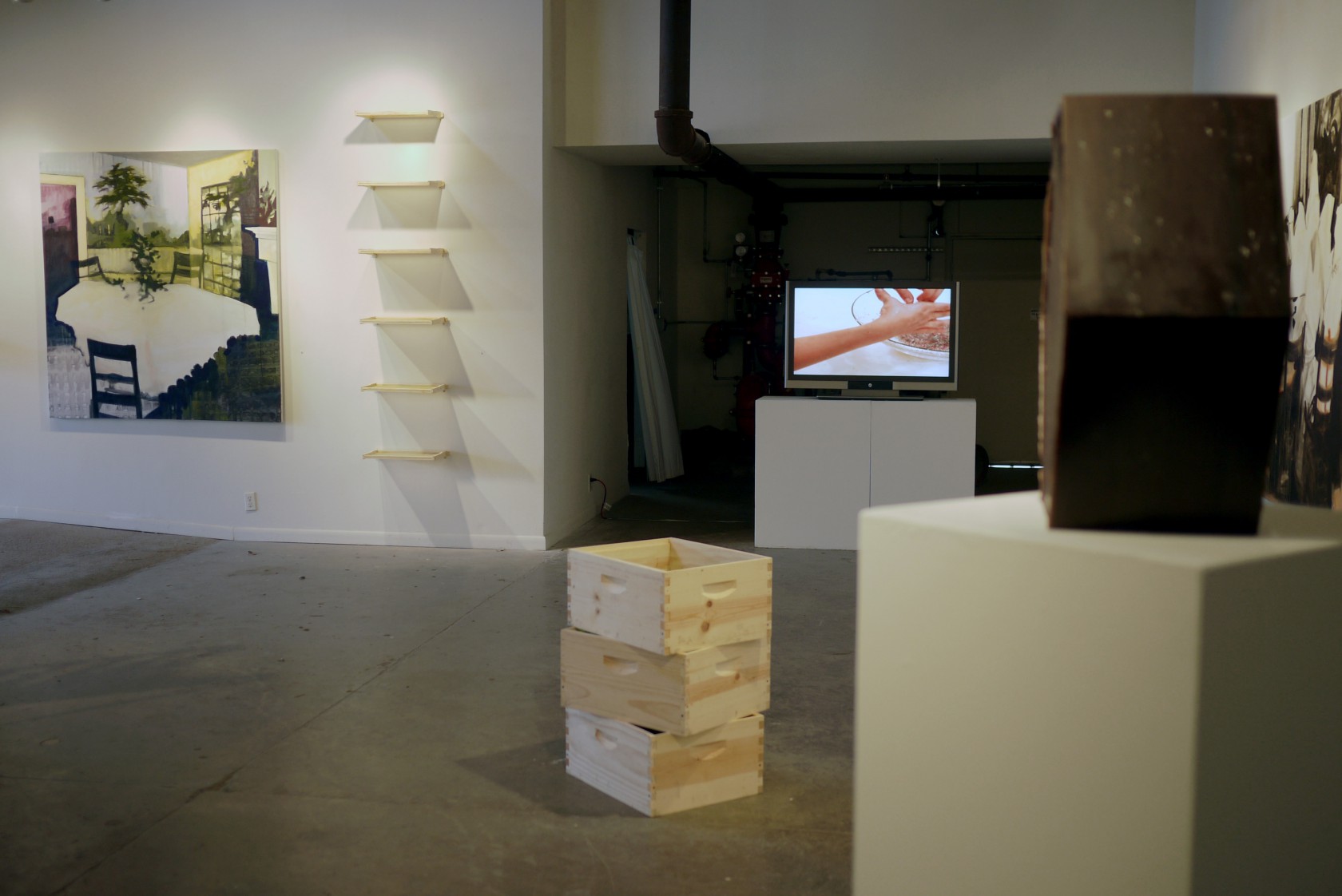 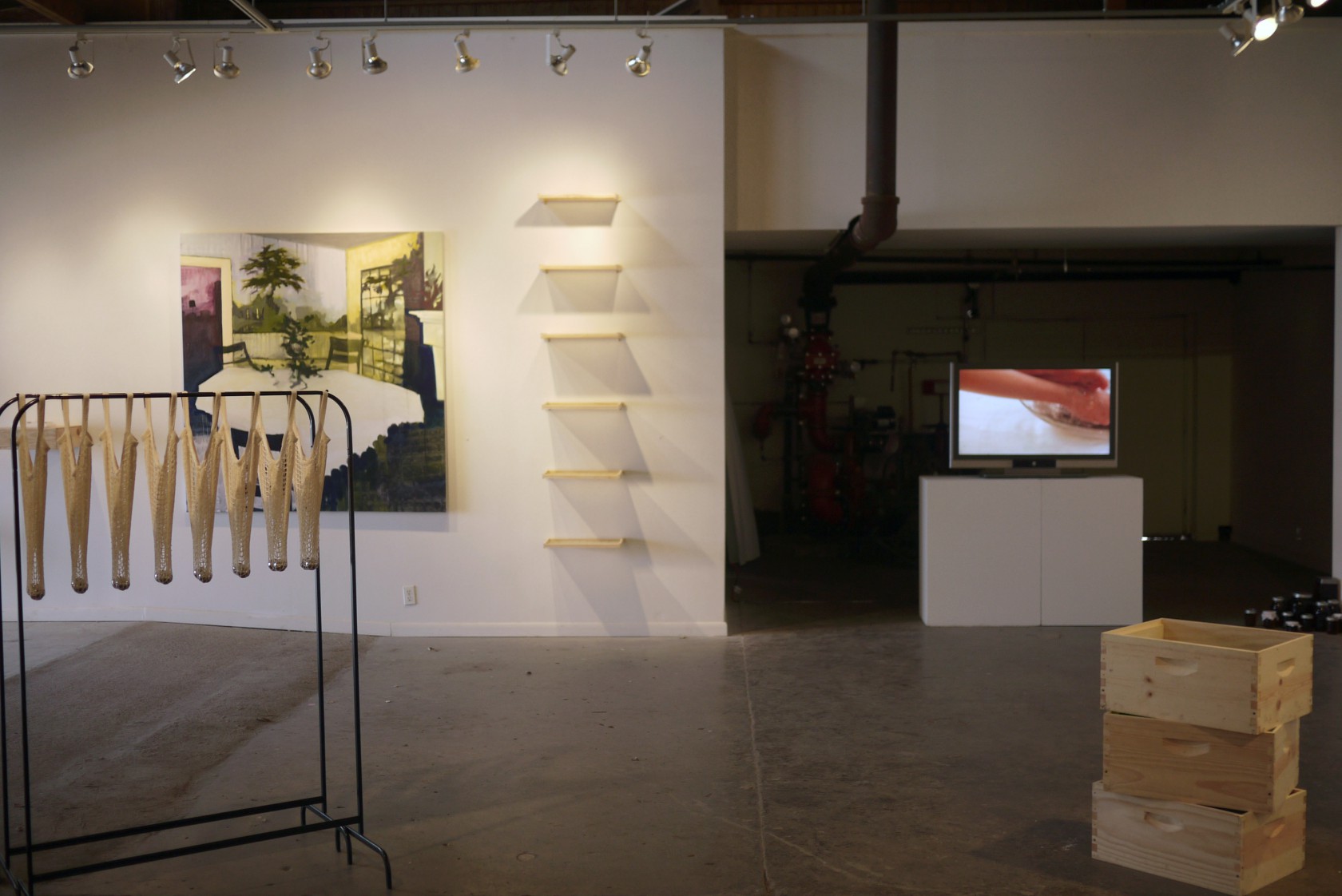 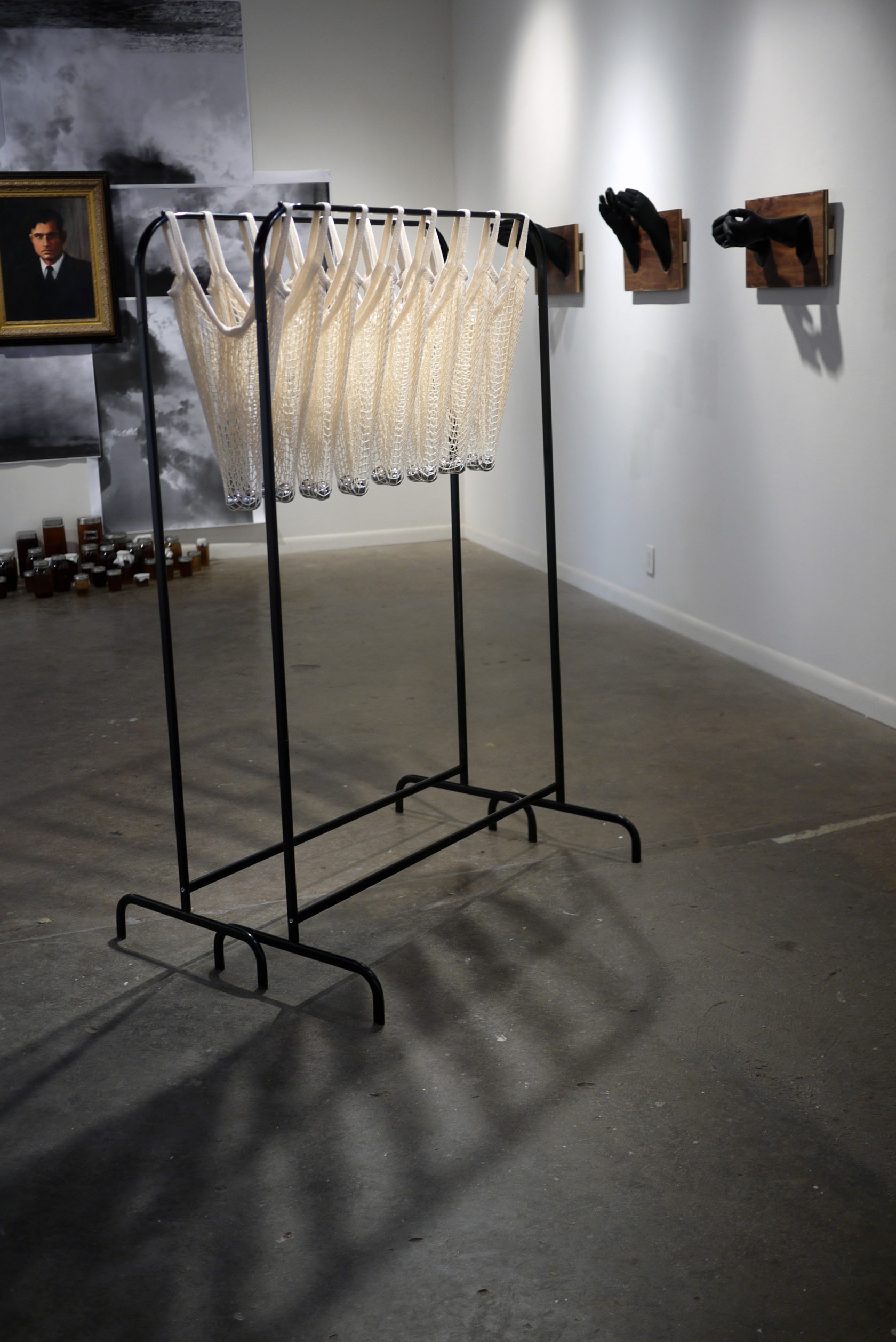 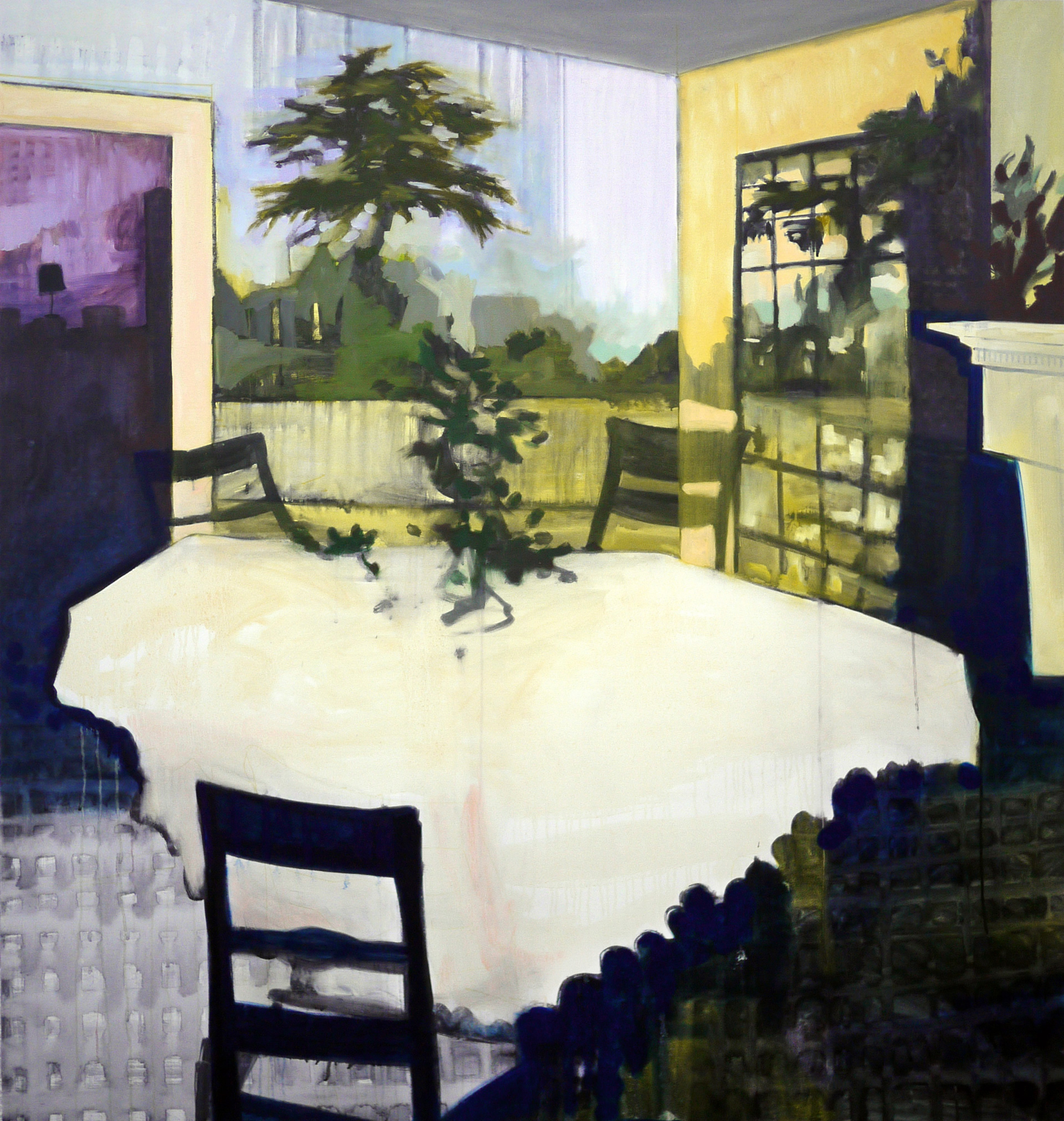 Growing out of her practice which has long been centered on the idea of ritual, Elizabeth McDonald Schwaiger through Contamination | Pollination explores the human hive, and the modes of communication and maintenance within it—ritual, protocol, etiquette, momentum, chain reactions, and the plasticity of free will. McDonald surveys human eusociality (hiveness) using the honeybee as both an example of our orchestrated relationship to the world external to our society, and as an analogy for our society itself. Implied in the title of her solo show are a broad spectrum of effects of eusociality. Honeybees, like humankind, are industrious cultivators and producers. They manipulate the external world simultaneously collecting pollen and sowing the seeds for next years harvest, in essence choosing which flowering plants will reproduce. Not so unlike what humans have done to the bee itself, the bees have breed and proliferated the plants most productive to the hive. On the other side of the coin, these success strategies are balanced by an increased vulnerability to disease through living in close proximity and the use of shared resources. Furthermore, eusocial animals, with the exception of some other rare and highly organized social structures (ape tribes, etc.), are the only prone to warfare. Conversely altruism too, while seen in some cases outside of eusocial groups, are documented with a significantly higher frequency within the hive-minded.

The honeybee hive is perplexing in its knack for making complex decisions seemingly impossible for the simple individual organism to fathom, and this has given rise to debate within sociobiology as to where the limits of the entity really lie; is the individual bee the complete entity, or is the superorganism of the entire social group a better set of borders? Similar questions can be asked of our own species. Where are the boundaries of our hive? Who do we sacrifice for? Only ourselves? Our family? Our city, state, country, or religion? or does our altruism extend to all humankind? Those questions of borders are but a few brought up by works like Three Chairs; Hear No Evil, See No Evil, Speak No Evil; and especially the large alterlike installation housing Vasili Arkhipov.

Arkhipov, an unsung hero by any measure, single handedly prevented all out nuclear war between the US and the Soviet Union during the Cuban missile crisis. He did so through his part in Soviet nuclear submarine protocol that required the unanimity of three before nuclear weapons could be launched. Arkhipov was the only dissenting vote. The event brings up that question of entity borders again. Were we, as I’ve previously implied, saved by Arkhipov single handedly, or was it the hive decision of the three that prevented nuclear war? Further still, perhaps it was the hive of the Soviet Union and the protocols of its military that prevented disaster, or on the grandest scale, perhaps it was Arkhipov’s higher mind acknowledging the great hive of the entire species (perhaps all species) that provoked his dissenting vote.

(While the sense of the hive may have prevented disaster, it should also be mentioned that the production of a nuclear bomb is quintessentially the act of the hive*. No single human is capable of it. While its architects may have had the mind for its inception, they undoubtedly did not have the resources or manpower to mine and enrich uranium, engineer its deployment device, and house it within the conventional explosives necessary to trigger the devastating reaction. … Though, in further proof of human eusociality, the same argument could be made for the production of a refrigerator.)

Elizabeth McDonald Schwaiger presents the power of the collective along with its fragility. She sums up the human condition, or better, the social condition, as one of incredible scope and responsibility, but one teetering a single bear swipe away from extinction. Through sculpture, painting, and video the artist has created a multifaceted view of salvation and dooming threats both. With references ranging from nuclear disaster, colony collapse disorder, and disease made palpable by the current Ebola epidemic; to religion, domesticity, and material cultivation, Schwaiger has created an ever shifting depiction of our connections to one another and the challenges to our collective self.

A RESEARCH BASED SOLO